Do you believe in life after death?

When her musician husband Orpheus disappears from a party boat in Sydney Harbour and is later found drowned, Eurydice goes through all the usual stages of grief. Disbelief, blame, anger, withdrawal. And then finally, she decides to find him.

But how do you go about finding someone who is dead? Where do you look, and how? And supposing that you do find them, what then? In 2001: A Space Odyssey,  the world of the aliens is so, well, alien that the humans can’t even begin to understand it, let alone communicate. Is the world of the dead any less strange and inconceivable to the living?

In the book I’m currently writing, I’m trying to explore love and death – in particular the kind of obsessive and intense love that binds the beloved even beyond the borders of material existence. Death is something that’s interested me for a long time – our last great adventure into the unknown. Love, for me, is also unknown to an extent. Like most people I’ve fallen in and out of love, have felt (so I thought at the time) an eternal bond and then lost it, but I’ve never felt so strongly about a man that I’d willingly follow him into the grave. For a child, yes. So I’m having to work quite hard at imagining how Eurydice feels…and this while backpacking Europe as it happens.

What do you think about love and death? Have you loved greatly? Have you ever seen a ghost or had an NDA? Talk to me (fallaciousrose@outlook.com) – I’d love to hear.

Photo by Filipe Almeida on Unsplash

Well, kind of, and that’s The Point of Us. A novel about what happens when the rug’s pulled out from under your feet. When you think you know who you are and where you’re going, and then, suddenly, you don’t.

Terentia’s agent’s just rejected her latest book; he says she’s missed the zeitgeist. Paul, a Catholic school teacher who desperately wants to do some good in the world, signs up to visit a notorious hitman in prison. Dave, a bus driver, is accused of racially abusing a passenger. And Emma has just found out she has a half-brother in supermax.

The Point of Us is about how we all deal with those times in life when it seems like there’s nothing solid to hold on to – and how we push through. By turns funny, tragic and uplifting, this book not only entertains but makes us question the assumptions on which we all base our lives.

Buy on Amazon ($2.99) or FREE until 22 March at other online stores.  While you’re there, check out my new historical thriller Pandora’s Jar, which has some really excellent reader reviews. 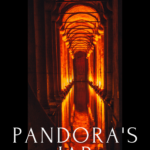 It’s 531 AD. Justinian and his ex-prostitute Empress, Theodora, rule the Eastern Roman Empire.  But fate is notoriously fickle. In this sophisticated, dangerous world,  you can be Emperor one day and a blinded, nose-less beggar the next.

Which is why Anastasia, successful ex-courtesan of Constantinople, has no interest in politics. Instead, she intends to spend her retirement relaxing on the terrace of her villa, reading, entertaining friends and enjoying the sea air.

Life, as usual, has other plans. On the morning after her retirement party, who should turn up but her handsome, lying bastard of an ex-lover, Michael Basilides. His noble new bride has vanished, and he wants Anastasia’s help to find her – discreetly. It wouldn’t do if anyone knew she was lost.

It’s not long before the corpses begin to pile up, including Anastasia’s much-loved protege Helena. Determined to avenge her friend and to get to the bottom of what’s going on, she sets off to find the elusive teenage bride – and discovers more than she bargained for.

Meet Anastasia, a feisty heroine who likes virile men, classic poetry and a nice warm bath, in that order, Chloe, her dagger-wielding, ball-crunching slave, and Euphemia, the kind of girl you’d probably rather kill yourself than spend a weekend with.

You can buy Pandora’s Jar at a range of online bookstores FREE until 28 February 2022 (except on Amazon, where you can find the e-book for $0.99 and a paperback is also available). Why free? Because Pandora’s Jar is a great read. And every great read needs REVIEWS so that everyone knows what a great read it really is!

So while it’s FREE (or as good as, on Amazon) buy it, read it and do please leave a review!

I admit, I’ve submitted to publishers a few times over the years, and been roundly rejected. Now my friends – who’ve read my latest book, Pandora’s Jar – say,  ‘Send it to an agent, it’s fantastic, they’re sure to pick it up!’

Well, it is a pretty good book, one of my best. So I’m thinking about it. On the plus side, a Netflix deal, oodles of money and Pandora’s Jar in the front window of Dymocks.

On the minus side…agents are SO annoying! Agent A only accepts manuscripts in July,  Agent B wants them submitted by snail mail, Agent C isn’t taking unsolicited manuscripts at all unless they’re from Jodie Picoult, and ALL of them want a monogamous relationship – only one agent at a time, even if that agent takes months to decide. Plus you have to write a ‘pitch’ which will amaze, captivate and intrigue the bastards. What! I put every creative ounce of flesh I had into writing the actual book,  and now you want me to seduce you with a pitch?

So what if, against all the odds, they do pick Pandora? Well, then whoever they get to publish it can ask me to take bits out, put bits in,  go through it with the proverbial fine tooth comb for anything that might offend…anyone really. And they can change my title! I don’t like people fiddling with my things.

“That time I went to Bible group, when I prayed to God to grant me a wish? I said look, God, if you want me to believe in you, this is what you’ve got to do, alright? Give me a family. I wasn’t thinking, give me a wife or a kid or nothing like that, I know I don’t have no kids and I don’t want a wife, not at my age. I was thinking maybe, just maybe…”

Paul smiles encouragingly. He can see that Trevor, for the first time since he’s known him (but then, he hasn’t known him very long) is overcome with emotion. His eyes narrow in an effort to hold back tears, the knuckles on the steel table clench.

“I was thinking maybe he’d find my mum, after all these years. It would’ve been a real hard ask, yeah, but he’s God, he can do what the fuck he wants, so no harm in asking him. I didn’t really expect him to come up with the goods, I thought the whole Jesus thing was a load of bullshit to be honest, but then…he did. Jesus gave me a family. A sister, a nephew, two nieces, a whole bunch of other folks too, but it was her that turned up. So I said to God, fair’s fair, Lord, you answered my prayer, when I didn’t even believe in you, so now I got to keep my end of the bargain, right? Cause I never break a promise, Paul, that’s me. I always keep my word.”

Paul is really moved. He speaks into the phone. “That’s a really wonderful story, Trevor. I’m so glad your sister found you, that must make a real difference to…”

Life in here, he means to say. Trevor wipes at his eyes with his free hand. “Yeah mate, it gives me hope, you know what I mean? Like, this place isn’t it for me, it’s not like, all I’m ever gonna be. I got someone who cares about me and you know what? Even though we never met before and she didn’t even know she had a half brother let alone one who’s in the fucking slammer for, you know, bad stuff, she does care about me. She’s a real nice lady…I’ve been lucky, and it’s all down to God, right? So, I guess it’s about time I paid him back, that’s what I’m thinking now. He did me a favour, now it’s my turn.”

And that’s an excerpt from the novel I’m currently working on, The Point of Us. The story involves Paul, a Catholic school teacher who signs up to visit Trevor, a maximum security prisoner and former hitman. Trevor’s recently got religion, and wants to explore, with Paul, the topic of God. Now this is HARD for an atheist. I don’t know what it feels like to love God, or believe in Him. I’ve read the Bible but I don’t find it convincing, let alone inspiring. So why is faith so important to Paul? And how does Trevor come to believe?

I guess you could call this cultural appropriation; an atheist trying to imagine herself into the skin of a devout believer!  Not to mention a law-abiding citizen trying to worm her way into the soul of a murderer for hire. It’s certainly a challenge…

Here’s an excerpt from the book I’m currently working on, about four people trying to find meaning in life.  Paul is a Catholic school teacher who feels he has nothing to teach…and his students aren’t interested anyway. Terentia, his wife, is a clapped-out novelist whose time has passed. Dave  gets caught up in a race conflict while driving his routine school run, and Emma discovers she has a notorious half-brother she never knew existed….